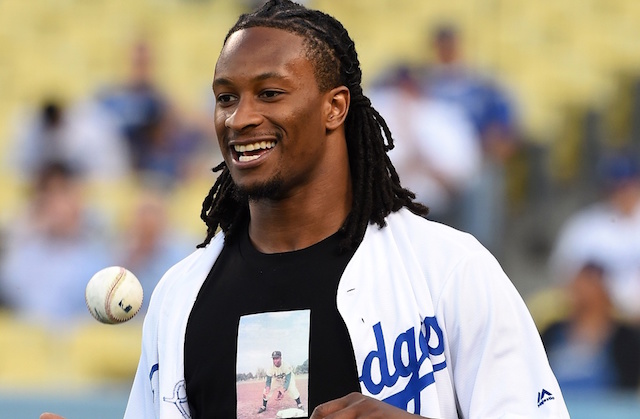 By Vincent Frank via Sportsnaut

I had the distinct pleasure to sit down with new Atlanta Falcons running back Todd Gurley this week to touch on a number of topics.

Signed by Atlanta during the spring, the three-time Pro Bowl performer congratulated LSU recruit Arik Gilbert on winning the 2020 Gatorade Athlete of the Year award

Gurley also opened up about starting training camp in the age of COVID-19 as well as the ongoing fight for racial equality and against police brutality in the United States as well as the related Black Lives Matter movement.

In the midst of the interview, Gurley noted that he was excited to head to Atlanta for his first training camp with the Falcons after five seasons with the Rams. He doesn’t seem to be too concerned about starting camp amid the ongoing COVID-19 pandemic. At least, when it comes to him personally.

YEAH MAN, I AM ACTUALLY IN THE MIDDLE OF PACKING. I GOT UP THIS MORNING, AND WAS LIKE, I’M GOING TO START MOVING STUFF. I AM EXCITED. I’M NOT REALLY TOO CONCERNED. I FIGURE WE WILL FIGURE THIS ALL OUT TOGETHER,” GURLEY SAID. “JUST LIKE EVERY OTHER LEAGUE IS FIGURING IT OUT RIGHT NOW. I AM MORE CONCERNED ABOUT FAMILY SAFETY. YOU KNOW, GUYS WHO HAVE KIDS AND PREGNANT WIVES. WE WANT SOME TO BE MORE SAFE THAN ME. IT’S MORE ABOUT FAMILY SAFETY THAN INDIVIDUAL SAFETY.”

I did ask about the NFL threatening to push camp back or cancel it altogether amid the ongoing financial rift between the league and players. He took it in a different direction, questioning why social media learns about this stuff before the players.

“MAN, I DON’T READ UP ON THAT. APPARENTLY, SOCIAL MEDIA GETS EVERYTHING BEFORE THE PLAYERS” THE FORMER GEORGIA STAR NOTED. “THAT’S ONE OF THE PROBLEMS. WE’LL SEE WHAT HAPPENS.”

That has been one of the issues for players with camp set to get going. Learning stuff from social media rather than from the league or the union. We’ve heard multiple stars speak out on this in the recent past, pushing back against reports and the like.

The conversation quickly turned to the prominent Gatorade Athlete of the Year award. A product of Marietta High School in Georgia, Arik Gilbert became the first tight end to win that exclusive award. He was surprised with the news early on Thursday.

Gurley talked about what the award means to him, especially his relationship in helping bring it to the forefront.

“TO BE IN THAT POSITION. I KNOW GATORADE DOES EACH STATE, AND IT’S JUST A GREAT AWARD TO BE A PART OF. I GOT THE OPPORTUNITY NOW TO BE A PART OF IT. TO SPEAK ON IT. THAT’S WHAT I AM GRATEFUL FOR. AND (TYPICALLY) GO TO THE GATORADE ATHLETE OF THE YEAR DINNERS,” ATLANTA’S LEAD BACK SAID. “FOR GILBERT TO WIN THIS YEAR, TO BE AN ATLANTA NATIVE, TO GO TO AN SEC SCHOOL AND ALSO TO BE THE FIRST TIGHT END TO WIN THE AWARD, IT’S AN HONOR. SO, CONGRATS TO HIM. I WISH HIM NOTHING BUT THE BEST.”

A total of nine Gatorade Player of the Year winners have gone on to win MVP awards in major sports. Gurley spoke to that, too.

“I MEAN, IT JUST SHOWS YOU NOT ONLY THE AMOUNT OF WORK THE PLAYERS PUT IN, BUT THE TYPE OF PEOPLE GATORADE PICKS. IT’S LIKE SOMEONE GETTING FIRST DIBS ON SOMETHING. KNOWING THE KID WAS GOING TO BE GREAT.”

The conversation quickly turned more serious with the murder of George Floyd taking center stage. For Gurley, this takes on new meaning heading into his first season in Atlanta, one of the faces of the Black Lives Matter movement in the United States.

Todd talked about an IG Live panel he took part in with Martin Luther King III and Jalen Rose, among others. “We want to talk about change. What needs to be done. The importance of voting,” he said.

The Georgia product also expanded on that.

“WITH ALL OF THE KILLINGS GOING ON. THEY HAVE OBVIOUSLY ALWAYS BEEN GOING ON, BUT THEY ARE NOW BEING RECORDED. FOR BIG LEAGUES LIKE THE NBA AND MLB. FOR THEM TO BE ABLE TO DO STUFF FOR THE BLACK COMMUNITY,” GURLEY SAID. “I FEEL LIKE IT’S DEFINITELY TIME TO SPEAK UP. ME AS A BLACK MAN BEING IN AMERICA, AND AS AN ATHLETE AT THE END OF THE DAY. I AM STILL BLACK. I WANT TO BE ABLE TO HELP THE BLACK COMMUNITY. THERE’S NO BETTER PLACE TO DO THAT THAN IN ATLANTA. I AM LOOKING FORWARD TO GETTING TO ATLANTA, DO STUFF WITHIN THE COMMUNITY AND BEING ABLE TO LEARN AT THE SAME TIME. I AM 25 YEARS OLD. I DON’T KNOW EVERYTHING. WHY NOT LINK WITH THE OLDER PEOPLE THAT HAVE BEEN DOING THIS FOR A WHILE AND LEARN FROM THEM?”

I want to thank Gurley for his time and wish him the best in his first season with the Falcons.